Black willow is native to the entire eastern half of North America, and it is found throughout Ohio.  It is typically found in wetlands and alongside streams, ponds, and rivers, as well as swampy or marshy areas.  Black willows have fibrous root systems that help to bind the soils along rivers and streams to prevent the soil from being washed away.

Black willow trees can reach 30 feet in height.  The estimated lifespan of black willow averages 65 years with a range of 40 to 100 years. 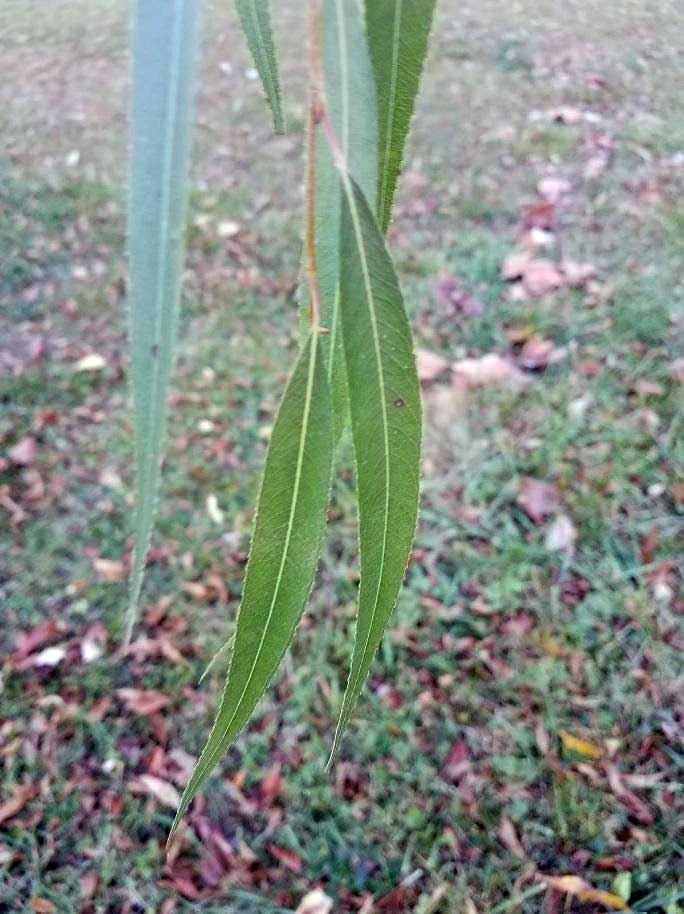 Black willow is named for the black bark that is found on mature trunks. The light green leaves are long, narrow, and fine-toothed.  Stems and twigs of young and new growth are bright green, with transition to tan and brown with fissures developing on the older branches. The branchlets are brittle at the base, where they join to the branches. With time, the bark develops a dark brown to black color, with scaly, interlacing ridges and deep furrows on the multiple trunks that often originate at the water's edge.

Pictures of the leaves, flowers, twigs, and bark can be seen at the following link: http://forestry.ohiodnr.gov/blackwillow

Black willow is dioecious, as are all willows, having male and female flowers on separate plants. As a result, seeds come from fruits that are found only on female trees. Chains of fruits, known as capsules, bear the seeds, released later in the spring. The willows are among the first plants to provide honey bees with nectar and pollen after long winters. Domestic grazing animals browse in willow thickets. Elk and beaver browse on willow leaves in the summer and willow twigs in the winter. A number of insect species attack black willow, but only a few, such as forest tent caterpillar, cottonwood leaf beetle, willow sawfly, stem borers, and twig borers, cause serious damage.

The wood is of moderately light to light density and is moderately soft. It does not splinter easily, which makes excellent wood for toys, crates, and barn floors. Most black willow lumber is used for shipping boxes. The lightweight wood from this tree was once used in the production of artificial limbs. The ancient Greeks knew the therapeutic values of willow. Tea made from willow bark was used for stiff joints and rheumatic pains.

Black willow is very susceptible to fire, and hot fires can kill entire stands of willows. There are other species of willows in Ohio that could be confused with Black Willow. Sandbar willows are typically smaller in size, and the leaves have coarser teeth.

Pictures of the Sandbar Willow can be seen on the following links: https://www.ag.ndsu.edu/trees/handbook/th-3-65.pdf