Birds abound in and around West Lake. A variety of waterfowl including ducks and geese can be found swimming across the lake’s surface or hiding among its reeds. Woodland birds can be found flitting among the trees that surround the lake, while raptors and scavengers can be seen soaring through the sky above the lake. This page focuses on water-associated birds that you are likely to encounter during your visit to West Lake.

Waterfowl and other swimming and wading birds commonly visit West Lake because of the abundant food and habitat resources the lake offers. If you follow the hiking trail around West Lake, you are likely to encounter some of these magnificent water birds: 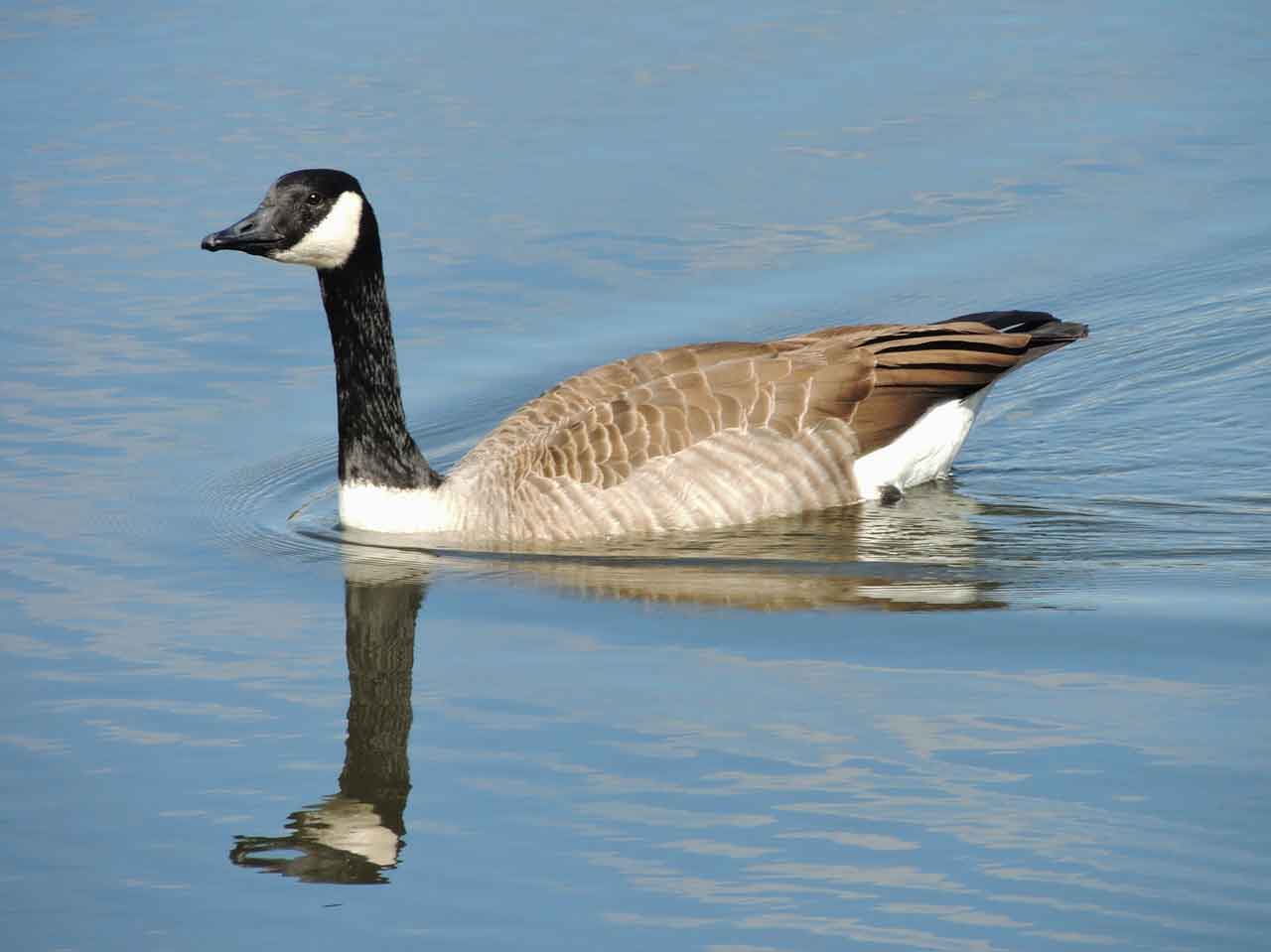 Photo: Canada geese (Branta candensis) are large water birds with long black necks and a white chinstrap. These geese are found just about anywhere a body of water is located. They are also commonly found in many fields and parks. Canada geese feed on grasses, sedges, berries, and seeds. Photo courtesy of Dr. Dan Mosher. 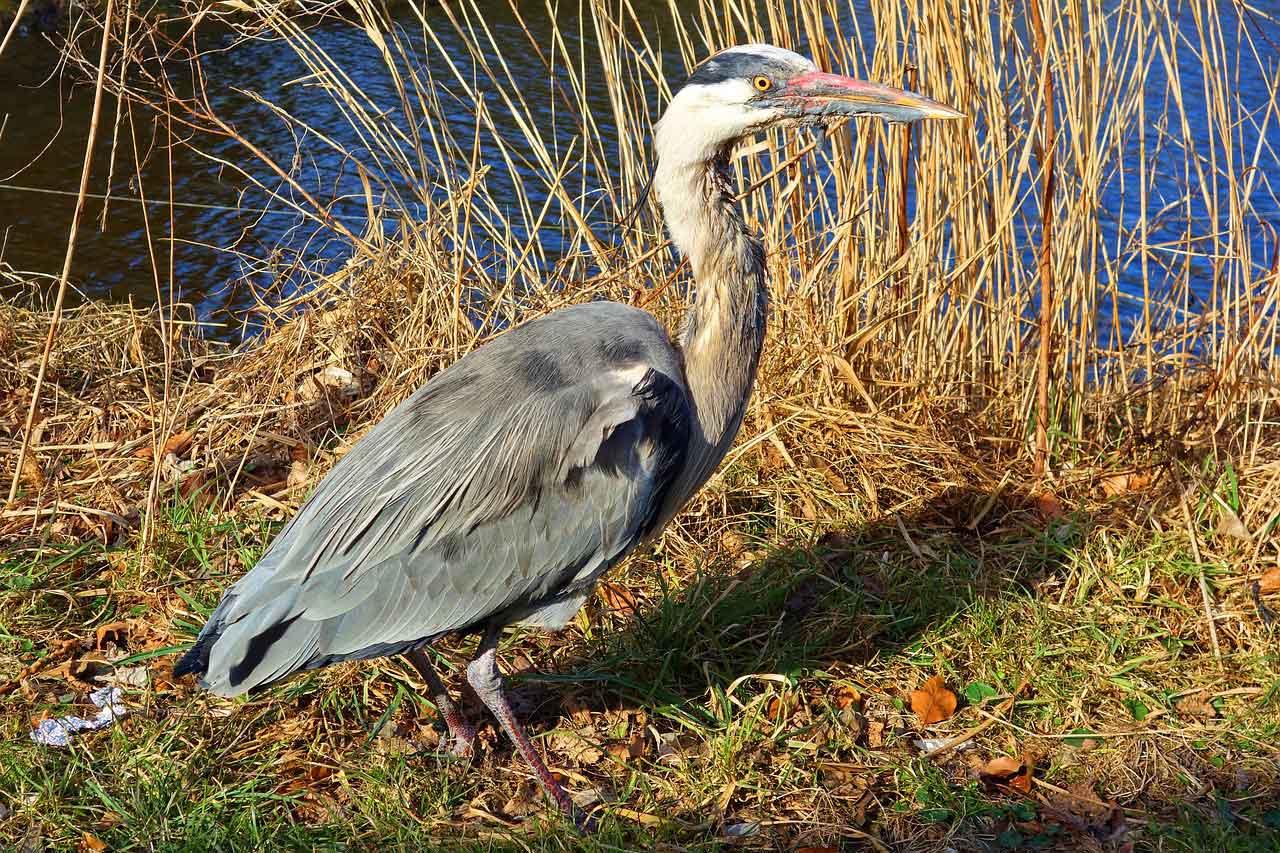 Photo: Great blue herons (Ardea herodias) are blue-grey in color and have a black stripe over the eye. They have long legs, an “S” shaped neck, and broad wings. They stalk fish and other prey in shallow water by wading slowly and then standing completely still. They strike fast and stab with their bill. Great Blue Herons are common in saltwater and freshwater habitats along coasts, riverbanks, and even backyard ponds. Photo courtesy of Dr. Dan Mosher. 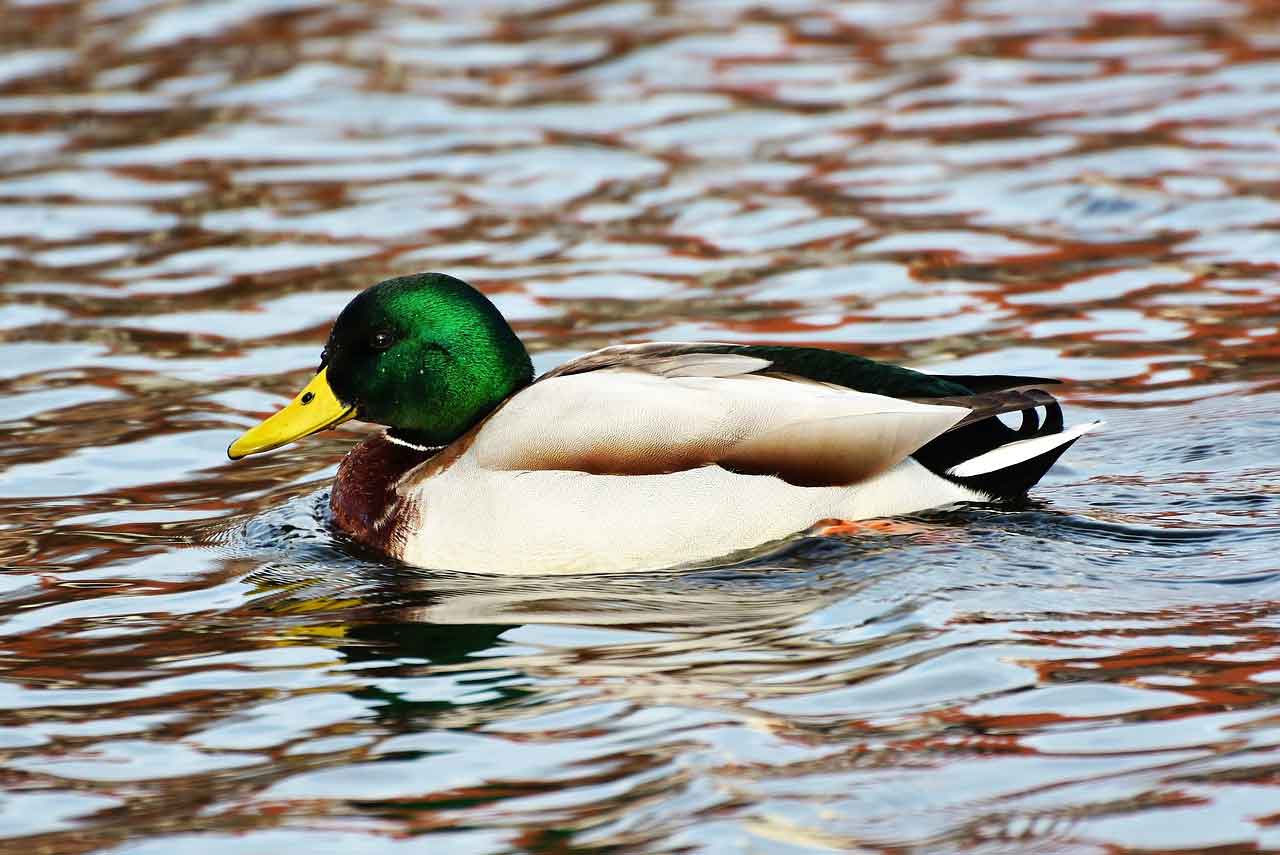 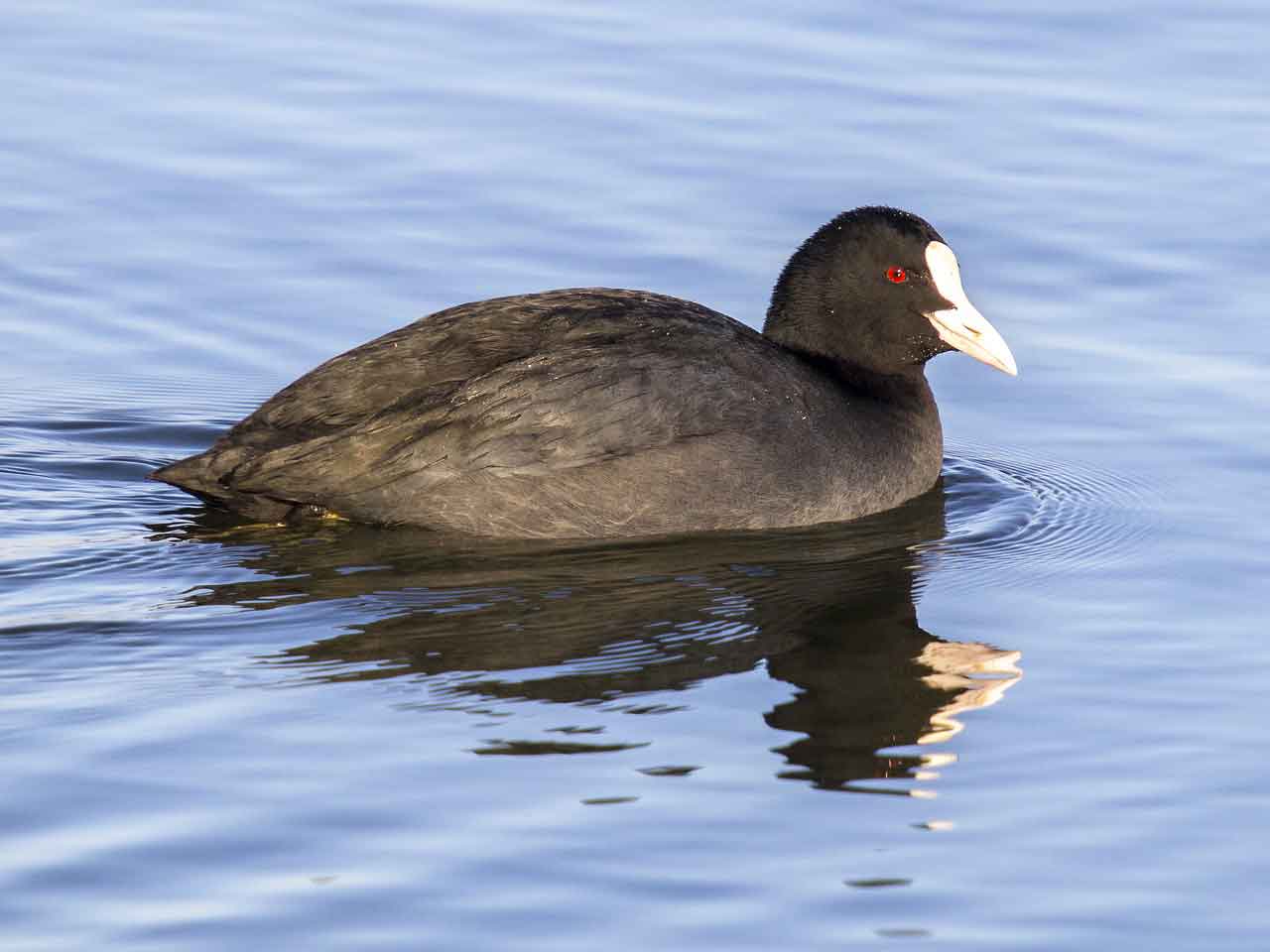 Photo: The American coot (Fulica americana) is a plump bird with a rounded head and chicken-like bill. It is dark grey with a bright white bill and forehead. American coots are found in parks, marshes, and lakes. The American coot’s diet consists of aquatic vegetation, terrestrial plants, and insects. Photo courtesy of Dr. Dan Mosher.

Some water-loving bird species don’t swim on the lake surface or wade into the waters. Instead, these birds get their water fix in other ways such as skydiving right into the water in search of a meal or flitting among the vegetation along the shore. Watch for the following common species as you tour West Lake: 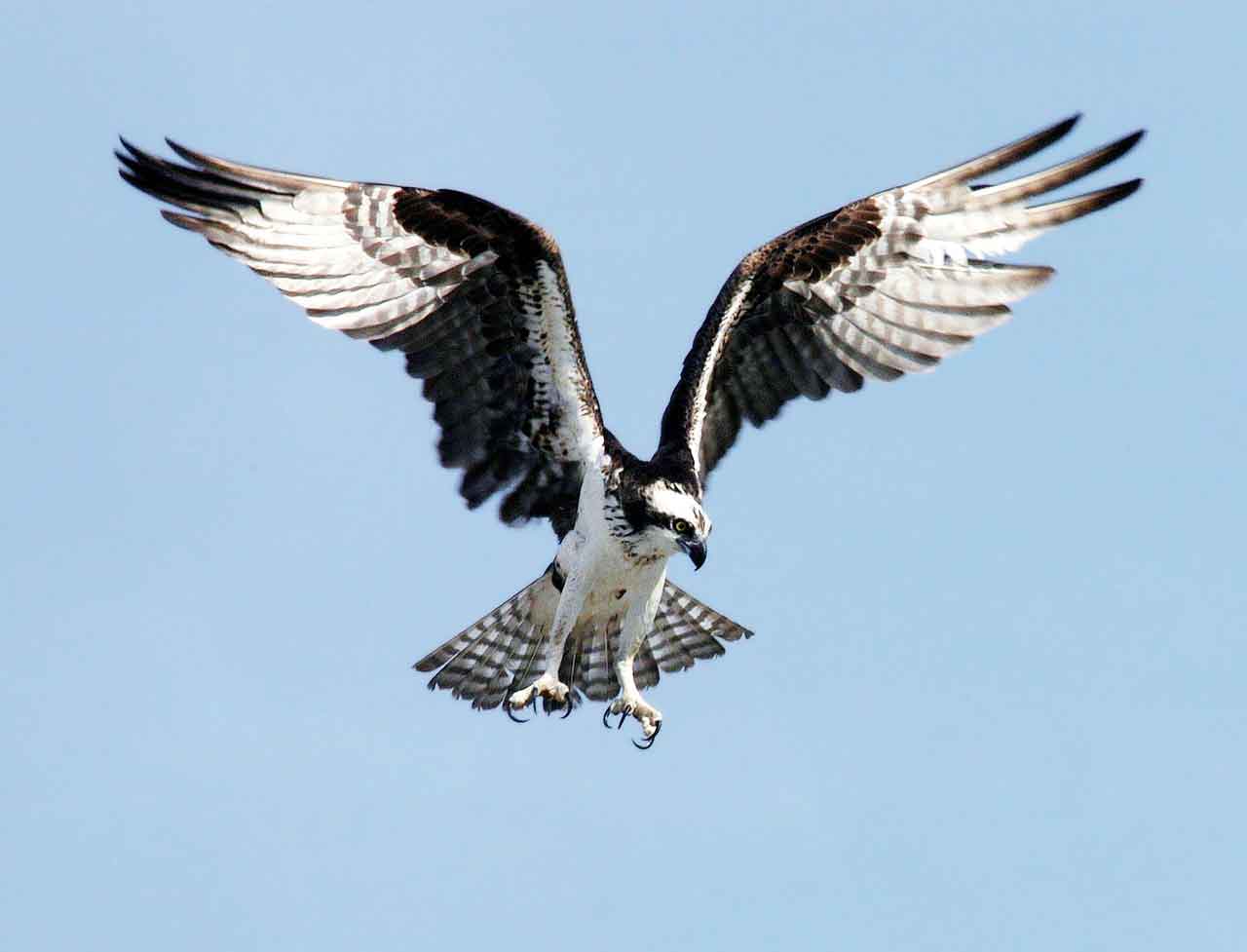 Photo: Ospreys (Pandion haliaetus) are large birds of prey with slender bodies and long, narrow wings. They have a dark brown backside and a bright white chest. The head is white with a brown stripe through each eye. Ospreys fly with a distinct kink in their wings, making an M-shape when seen from below. Ospreys eat almost exclusively live fish, and they will dive as far as three feet into the water to catch one! Their habitat includes any fish-filled body of water such as rivers, lakes, reservoirs, and lagoons. Ospreys nest in the open on poles, dead trees, and man-made nest platforms. Photo courtesy of Dr. Dan Mosher.

Photo: Belted kingfishers (Megaceryle alcyon) are stocky, large-headed birds with a crest on the top and back of the head. Belted kingfishers are blue with fine, white spotting on the wings. Males have one blue band that extends across the white chest, while females have blue and chestnut colored bands. They spend most of their time perched along edges of streams, lakes, and estuaries searching for small fish. Photo courtesy of Dr. Dan Mosher.

Photo: Red-winged blackbird (Agalaius phoeniceus) males are easy to identify with their all black body and distinct red and yellow shoulder patches. Females are dark brown and streaked and have a yellow-white eyebrow band just above the eyes. Red-winged blackbirds can be found around wet places such as lakes, ponds, and marshes. They can sometimes be seen in and around dry fields as well. Red-winged blackbirds eat mainly insects in the summer but will feed on seeds in the winter. Photo courtesy of Dr. Dan Mosher. 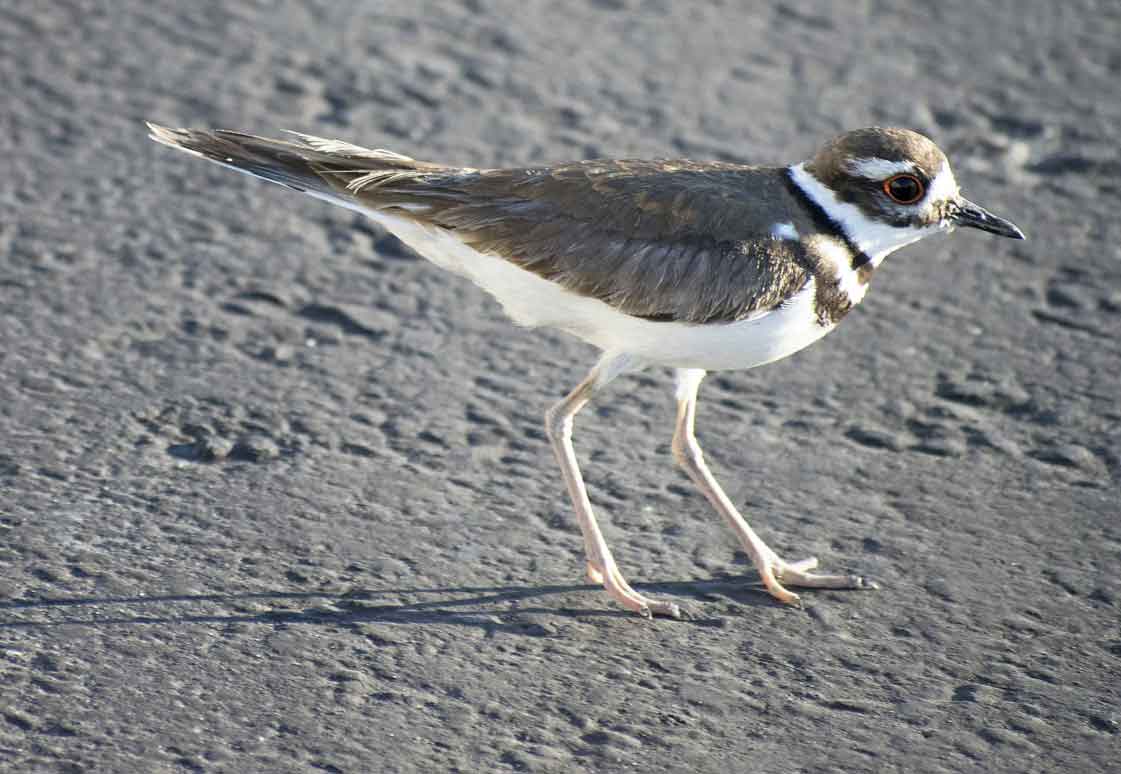 Photo: Killdeer (Charadrius vociferous) have large, round heads, large eyes, and a short bill. They are brownish-tan on top and white below. The chest is barred with two black bands and the brown face is marked with white patches. They can be found on open ground with low vegetation including lawns, golf courses, and parking lots. Killdeer feed primarily on invertebrates and will wade into water in search of a meal. Photo courtesy of Dr. Dan Mosher.

For more information about these bird species and others visit: