Other common names include wild black cherry, mountain black cherry, and rum cherry. Black cherry belongs to the Rose Family (Rosaceae) and it is related to orchard trees such as apples, plums, peaches, apricots, cherries, and pears. Black cherry is common in Ohio and widespread throughout eastern North America. 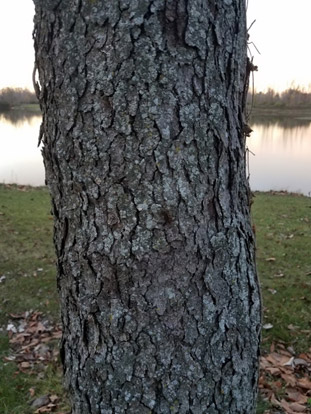 The black-gray, flaky mature bark is very distinctive. The reddish-brown underbark is exposed where the outer bark is cracked.  The bark of smaller branches is reddish and marked with short horizontal lines.

The leaves are long and narrow with finely toothed margins.  Pictures of the leaves, flowers, fruits, and bark can be seen on the following link: http://forestry.ohiodnr.gov/cherry

The leaves, twigs, bark, and seeds produce a cyanogenic glycoside. Most livestock poisoning comes from eating wilted leaves, which contain more of the toxin than fresh leaves.  But white-tailed deer can browse seedlings and saplings without harm.

The inner bark, where the glycoside is concentrated, was used historically in the Appalachians as a cough remedy, tonic, and sedative. The glycoside derivatives act by quelling spasms in the smooth muscles lining bronchioles. Very large amounts of black cherry pose the theoretical risk of causing cyanide poisoning.

The fruits are berry-like and black when ripe. They can be found from June-October. Some of the fruits are eaten prematurely in mid- to late summer by birds and mammals, when the small cherries have a red or purple color. The remaining fruits will turn black and are sweeter, juicier, and softer.

The fruit has been used to flavor rum and brandy (“cherry bounce”). Pitted fruits are edible and are eaten raw and used in wine and jelly. The internal seed easily germinates and is widely dispersed by the many animals that consume the fruits.

Black cherry is valued for its lumber. Its beautiful, fine-grained, heartwood ranks close to black walnut as the ultimate choice for making solid wood furniture, interior trim, and high-quality veneer.

The fungal disease “black knot” is common on black cherry. It causes elongated, rough, black swellings on the twigs, branches, and trunk.

Like many members of the Rose Family, black cherry has pest problems with the most serious being tent caterpillars, borers, scales, and aphids. The eastern tent caterpillar and the cherry scallop shell moth defoliate black cherry and can cause growth loss and mortality. Other diseases found on black cherry include leaf spot and trunk canker. Cankers are dead sections of bark on branches or tree trunks. The majority of leaf spots are caused by fungi, but some are caused by bacteria. 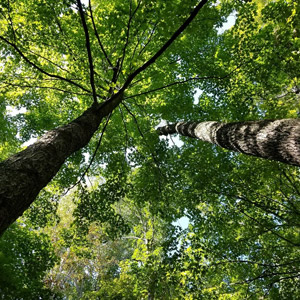