Although the park and its history as a glassmaking factory is significant, we have to wonder why its founders believed Mount Vernon to be uniquely important. In 1868, Peter Neff supervised the drilling of many natural gas wells near the county line of Coshocton and Knox, where the Kokosing and Mohican Rivers converge.  Gas companies soon flocked to the area, hoping to develop this abundance of natural gas. Emitting less carbon dioxide into the atmosphere than traditional fuels such as coal and wood, natural gas served also as a cheap and consistent fuel for many activities, including the energy-intensive manufacture of glass. In addition to this plentiful resource, Knox County hosted an abundance of silica sand, an important component in glassmaking. Different from river sand found near the Kokosing, silica sand is harvested from local sandstone and contains fewer impurities, creating fewer defects in the glassmaking process.

Together, natural gas and silica sand play a vital role in glassmaking, as the gas serves as the fuel to melt the sand into glass. Many glassmakers were attracted to the area by this combination of resources, including the Pittsburgh Plate Glass Company (PPG). Founded in 1883, the Pittsburgh-based company built a plant in Mount Vernon in 1907, marking the first sheet glass plant in the town as well as one of the first in North America. Specializing in automotive glass, PPG thrived during the 1910s and 1920s during the automobile and construction boom. After refining production technologies for seven decades, PPG’s Mount Vernon plant location closed in 1976. 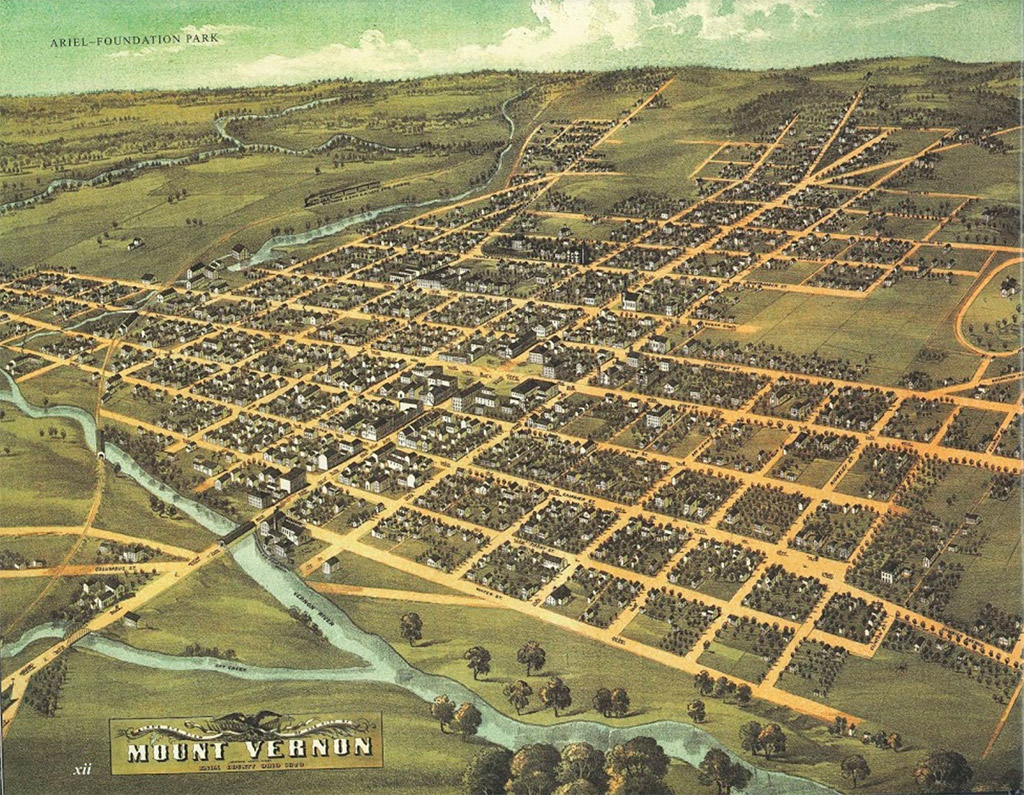 An 1870 aerial view of Mount Vernon looking toward the northwest, two years after Neff discovered an abundance of natural gas in the area.  Printed in Ariel-Foundation Park by Aaron J. Keirns, courtesy of the Library of Congress.